Andalusian versus warmblood as a dressage horse in a modern competitive sport.

Spanish horse versus warmblood, what are the differences?

I know I have probably touched a bit of a sensitive spot here, but I am of the opinion that the PRE horse needs a bit of backup in this field. Even though people within the professional dressage world are getting more and more accepting when it comes to seeing the Spanish horse as a fully functional dressage horse, there is still a lot of prejudice aimed towards Iberian horses.

I think the biggest concern towards the PRE in terms of dressage is how they move. The most common misconception is that

The Andalusian horse breed is one of the oldest breeds in the world. It has gone through stages of fashion and functionality just as any other breed. There are horses with good movement and horses with bad movement in every breed. This is also the case with the Andalusian. To mark my point I would like you to have a quick look at the videos below.

1. This video shows a few amateur horses that I have for sale or that have been sold, plus one bonus of a very famous PRE horse..

Can you see any difference?
No I didn’t think so!!

I am glad we sorted that out. Now we can proceed to talking about the actual differences between the two breeds.

And before I start.. What I’m saying below, are my own thoughts taken from many years working within the horse industry and my own studies on horses. I am not claiming to be right.

Let’s first look at the basis of the horses. The breeding.

What does the breeding focus on?

Northern European Warmblood: Performance and movement. Only a few of the best professionally performing horses will be used in a breeding program. Who doesn’t want a horse that has the potential of getting up to a Grand Prix level in dressage or jumping? If you are a professional rider, you would beg for such a horse as they are far and few between. To a dedicated amateur rider these horses may look like a easy way to a professional career. Truth be told, many of these horses belong in the hands of professional riders. I.e. a person that has made horses his or her profession and is riding and training horses 8 hours a day. For all other riders it may be that the line with the best movements is a tad to hot to ride, or even handle for that matter… In many ads for warmblood horses I have read “needs experienced rider”. What that really means, is that this horse has a strong character and/or is not suitable for most amateur riders. If a breeding program is focused on performance horses, there is a high likelihood that a degree of inbreeding has occurred to preserve a certain trait (amazing movements, ability to jump etc.) that is the “mark” of the line. As we know in humans, inbreeding can cause a range of physical and psychological problems in the child. It’s the same with horses. This in combination with a high level of agility could be a potential death trap for an inexperienced rider.

Andalusian: Character, character, character! The Spanish horse has been a working animal for centuries and has always been bred to be social and cooperative with the human. Any horse with a bad character has traditionally not been used for breeding. Most Spanish horses have an agreeable character from the start. This is a formidable ground to start looking at the horses with the best movement for dressage. Even if we chose a hotter, more sensitive PRE for performance sport, the basic character and predictability is still there. You can expect less surprises on the character with a Spanish horse. The Spanish horse is a kind breed. Some say that they have a human soul.

Can you have Performance and movement in combination with safety and good character?

Yes with the Andalusian I think you can. I believe you can find a remarkable horse with outstanding paces. 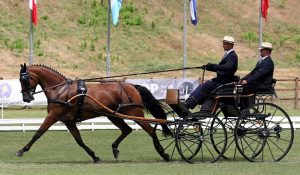 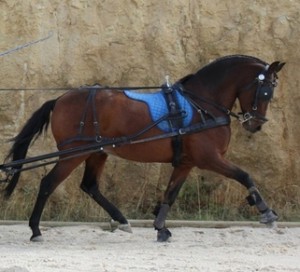 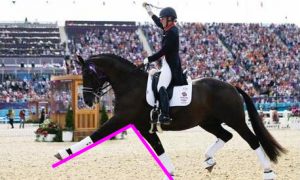 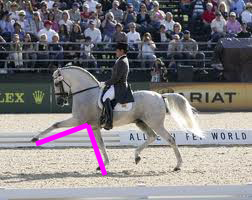 Northern European Warmblood: From the start engineered to pull carriages and work farm land. Later refined with the use of Arabian horses and thoroughbred horses.

If we look at the conformation of a horse designed to pull, in short we can often see a lower set neck, a straight shoulder with a big wither, a longer back and back legs designed to push forward. This is a great horse to work in an “open shape” letting it reach forward to the bit and getting “his shoulder into it” and those back legs pushing forward (as if pulling), getting him into a good rhythm with a good cadence. He can work for hours that way and be happy with it.  In that shape the back is following through the movement, which makes it swing up and down as the horse is reaching forward into his working position.

Preferably he works in a straight line, but he can also be taught to work comfortably on a bent track. He can do shoulder in and halfpasses and it looks fabulous. He is big and strong and is designed to pull and requires a support and steady contact with the riders hands. Because he has a higher degree angle in his shoulder, his front leg will take a longer stride under his body and the movement will travel more through the shoulder of the horse and up through the wither. This could give a jerky sensation for the rider if the horse is a big mover. Many times these horses can be hard to sit for amateur riders. 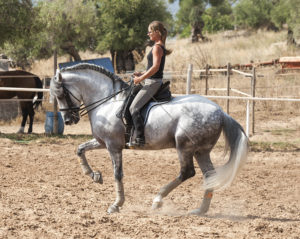 Andalusian: From the beginning bred and used as a “war horse” adapted to carrying a rider in arms to battle. To be able to turn on his haunches in a millisecond to face an opponent or to sprint away from the danger to protect his rider. In those days the horse was the reason for life or death. The horses were built for collected work, speed and agility. Since the warrior would spend days on end at horse back, the horse had to be comfortable to sit on and have a soft stride. The Andalusian has an advantage for collection. This means that it’s easier for the Andalusian to tuck his bum in and lift his own back and the rider up. He was designed to carry more weight on the rear. Because of it being no effort for him to carry a rider in this position, he will naturally work with more suspension and he will feel softer to sit on. This has got to do with basic conformation. When a horse is working in this collected higher position with the rider he will feel lighter in the hand and softer to sit on.

Are you saying all warmbloods are harder to collect and hard to sit?

No. In general it has nothing to do with the actual breed how comfortable the horse is to sit on. It’s all got to do with the basic build of the horse; it’s conformation. The Spanish horse was from the beginning designed to carry a rider, and to collect. The northern European horses were designed to pull a cart, even though they have been modernised a lot since then. The content of this is that it’s probably easier to find a PRE horse that will be light in the hand and comfortable to sit due to the above stated.

Interest in work and cooperation…

Having talked about choosing the right conformation for a dressage horse it means very little if the horse is not willing to cooperate.

As they say in Spain, the important thing is to “tener corazon” which means to have a heart, a spirit that will try his best and work with you until the work is finished. A horse with “corazon” is worth a million more than a horse with good conformation. It’s what makes a winner.

The Spanish horse was born with a heart for both of you. He will try to please you until the end of time, and when he is too tired to work he will give another 100%. Unlike a warmblood who will put you on the floor of the arena if he is unhappy, if the Spanish horse hurts he will not tell you. He will still try to do his best until he can’t walk anymore. Owning a PRE horse is therefore a big responsibility for you as his “guardian” because he doesn’t have the “heart” to tell you if he is not feeling well. You need to learn to read him and understand him so that you know when to stop the training and when he is tired.

Taking them out and about.

There is a reason as to why the most common horse you see in the movies is a Spanish horse. They learn quick and they are focused and levelheaded to be able to endure the stress during a film set. With your Spanish horse it takes no time to teach them the exercises. When they get it (and that’s fast) they remember till next time. It’s that combination of “corazon” and intelligence that makes them feel like they have a human soul. In a movie set there is only a short time of action, the rest of the time is spent waiting around, whilst people, cameras, lifts and all sorts of funny stuff is right next to you and around you. That is a stressful situation for an anmial. This wont faze a Spanish horse.

A Spanish horse is a versatile horse more suitable for any form of dressage riding than any other breed due to it’s high ability to collect and extend. It’s also the breed most suited for amateur riders due to it’s docile character.

Any cookies that may not be particularly necessary for the website to function and is used specifically to collect user personal data via analytics, ads, other embedded contents are termed as non-necessary cookies. It is mandatory to procure user consent prior to running these cookies on your website.